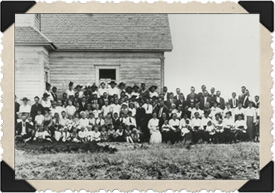 Sometime before 1884, nine people organized what later became the First Baptist Church of Hurst near the community of Bransford, a few miles northwest of Bedford. The church was originally called the Pleasant Run Baptist Church, and the congregation met in an old log cabin.

In 1884 this congregation united with other small community churches and built a church in Bedford. Twenty years later, Tom Hurst and Elbert Souder acquired land on present-day Highway 10 in Hurst, and in 1908 the Bedford church moved to that property. Church members tore down their building plank by plank and rebuilt it on the new property, keeping the cost of the move to about $100. The original pulpit was kept and used by the church until 1953. The site is presently occupied by a machine shop and is across from the former South Hurst School.

In 1936 the church moved to a new location at what is now Highway 10 and Holder Drive to make way for the construction of Highway 183. The church remained there for 53 years, during which time the church fully utilized its five-acre site with additional buildings providing needed educational and recreational facilities.

Church leaders, realizing that the city’s growth was to the north, took a bold step in April, 1983, by establishing a second location in the northern section of Hurst. That was a unique concept–one church in two locations. That small congregation worshipped in the cafeteria at Bedford Junior High School until August, 1985, when a new, modern worship center was opened and dedicated near the intersection of Norwood Drive and Harwood Road. A second building phase added needed educational and office facilities, and the congregation continued to grow. In July, 1989, First Baptist sold its property on Highway 10 and moved its entire staff and all its programs to the northern location where it continues to be a light in the Mid-Cities area.

In September, 2013, the church became one church on two campuses, as we launched a second campus in the River Trails community, immediately south of Hurst. Meeting initially in the River Trails Elementary School facility, this campus serves to help the people of the River Trails neighborhoods worship, connect, grow, and serve, as they live on mission.

The First Baptist Church of Hurst believes that its position in the community is to be a safe and secure place where people are challenged and changed for their good and God’s glory. The church challenges each member to be true disciples of the Lord and continues to guide all generations to know and follow Christ.